This is an unofficial name given to a certain prototype 2005 Furby that speaks using the voice of the 1998 Furbys. It was displayed at the International Toy Fair in New York during 2005. 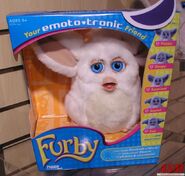 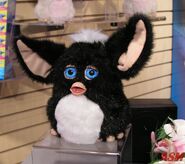 a gif of the gray Furby prototype

Retrieved from "https://official-furby.fandom.com/wiki/2005_Furby_Toy_Fair_Prototype?oldid=39633"
Community content is available under CC-BY-SA unless otherwise noted.