In 2005, Hasbro held a contest where the winners would receive a trip to the United Nations Plaza to see the reveal of the new Furby. About 40 "delegates-in-training" from around the world were chosen to attend the event, which took place on August 2nd, 2005. At this event, enthusiastic instructors (Including John Henry Jorgenson, claimed as the "world's greatest linguist") taught the children about different languages, including Furby's own language, Furbish. By the end of the event, kids were given medals with Furbys on them that designated

them as official Furby ambassadors of goodwill, and also Furbys of their own, and were even able to make necklaces for them.

Links to articles about the event: 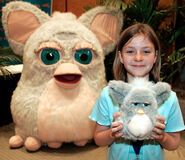 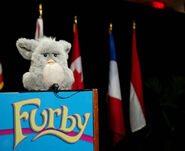 Add a photo to this gallery
Retrieved from "https://official-furby.fandom.com/wiki/2005_United_Nations_Plaza_Furby_Reveal?oldid=25284"
Community content is available under CC-BY-SA unless otherwise noted.