The Angel Furby is a special edition 1998 Furby.

Released in November 2000, the Angel Furby was released to celebrate upcoming Christmas. Only 10,000 were made, making this Furby very rare.

The Angel Furby has white body fur with tinsel. It has a white hair tuft and tail. The faceplate is white. It has white feet, white ear insides, white ear backs, and white eyelashes.

It wears a golden halo and holds a golden harp. Two white angel wings sprout from the same place on its back. 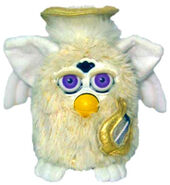 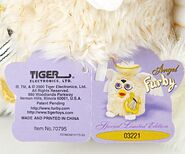 Retrieved from "https://official-furby.fandom.com/wiki/Angel_Furby?oldid=36499"
Community content is available under CC-BY-SA unless otherwise noted.