Baby Brainy is a 1998 Furby rip-off B/O Electronics which is only known to have been distributed in the U.S.

Baby Brainy's appearance usually resembles a bear with round, circular ears and a yellow, pointed beak like a bird. It has two floppy arms and legs that stick out, a bear nose on its pointed beak, and a set of white eyelids. All Baby Brainy's are known to have gray eyes. The only three colors Baby Brainy was sold in include brown, white, and pink.

Its appearance resembles a bumble bee with shiny, gold wings and antennae made from golden pipe cleaners and yellow pompoms. It has a pointed beak, but without a bear noise on it. It also has a white stomach and two yellow feet. Because this version of Baby Brainy has no ears, it moves its wings up and down instead. 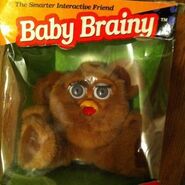 Dee-Mah the Baby Brainy
Add a photo to this gallery
Retrieved from "https://official-furby.fandom.com/wiki/Baby_Brainy_(Furby_Fake)?oldid=24816"
Community content is available under CC-BY-SA unless otherwise noted.