The Bear Furby is the name given to a 1998 Furby from Generation 2. It was released in March, 1999. It has a natural color scheme, and is similar to the Gorilla and Coffee Furbys.

The Bear Furby has light brown body fur. It has white stomach fur, and a dark brown tail. The faceplate is a light tan or cream. It has white feet, white ear insides, and black eyelashes. 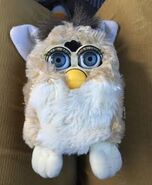 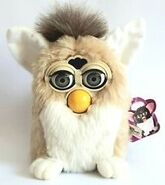 A Bear Furby with a Giraffe Furby at the end of the Japanese Commercial, "Living With Furby".

Retrieved from "https://official-furby.fandom.com/wiki/Bear_Furby?oldid=34203"
Community content is available under CC-BY-SA unless otherwise noted.