free (given out as a prize)

Donbei Original Kakeai Manzai Family (どん 兵衛オリジナル かけあい漫才ファミリー ) is the name given to a set of three electronic bootleg Furby's which look like foxes. They were given out as a prize by a company called Nissin in Japan during 2000. These foxes came in three colors, wearing aprons with Donbei's logo on them.

Each fox from the set has a name, a color scheme, and some different features.

The blue fox's name is Pecha Bei (ぺちゃ兵衛). Though this fox's fur is blue and it has black eyes, a previous version of this fox from 1999 has orange fur with green eyes. 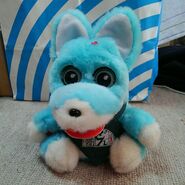 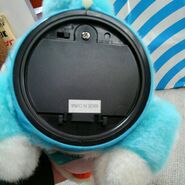 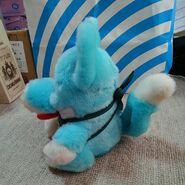 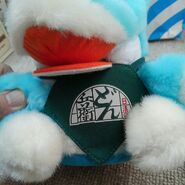 Donbei's logo on Pecha's apron
Add a photo to this gallery

The pink fox's name is Kucha Bei (くちゃ兵衛). The previous version of this fox from 1999 has a darker shade of pink for her fur and green eyes. This version of Kucha only has black eyes. She is the only fox with eyelashes from the set.

Kucha can sing with Pecha and Mini when Pecha's left arm is pressed sometimes. She can also talk to Pecha when his left arm is pressed. She responds when you clap your hands loudly at her. After responding, Pecha will say something and sometimes make a noise. After this, Mini will respond to him after Pecha has finished talking or making a noise. 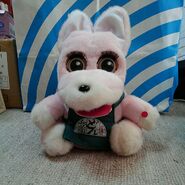 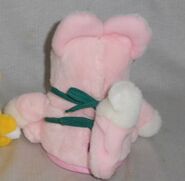 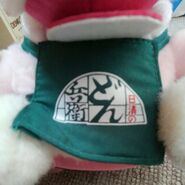 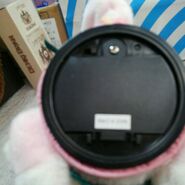 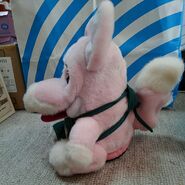 Kucha (side view)
Add a photo to this gallery

Mini Bei (ミニ兵衛) is the name of the small, yellow fox. It was not featured in the 1999 version of the set.

This fox can't move its tail, but is only known to be able to move his eyelids. He runs on four AAA batteries unlike Pecha and Kucha who use four AA batteries. Mini can respond to light. By putting him in a dark room Mini will either say "Good night" or he will snore. By putting him in a lit area, he will say "Good morning" or make a rooster noise. He can have conversations with Pecha and Kucha and sing with them. 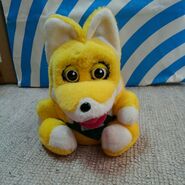 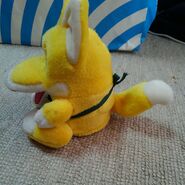 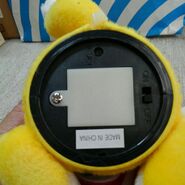 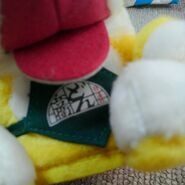 Mini's apron with Donbei's logo
Add a photo to this gallery

Two different phone straps with figures based off Mini exist. Mini is the only fox known to have merchandise that is confirmed to have been based off himself, unlike Pecha and Kucha.

There are two pink and blue plush fox alarm clocks, which were offered in 1991 in a campaign, and it remains unknown if Pecha and Kucha from the Kakeai Manzai Family had their designs based off the colors of the plush clocks. In 1990, similar plush clocks were offered in a campaign, however, they were only available in orange.[1]The alarm clocks were installed in the back of the foxes' heads.

Blue and pink alarm clocks from 1991.

Orange plush alarm clocks from 1990.
Add a photo to this gallery

A phone strap with a 3D figure of a fox, which looks like Mini, is known to exist. However, the packets for these phone straps don't mention the name of the figure attached. It still is very likely to resemble Mini since an illustration of another fox phone strap, which is seen on the packet, was based off the appearance of another toy fox that had been given out in a campaign by Nissin in 2001. Not much is known about this phone strap of Mini, and it remains unknown when they were sold or given as a prize. It's unconfirmed whether the other phone strap, illustrated on the back of Mini's phone strap packet, exists.

The back of the packet 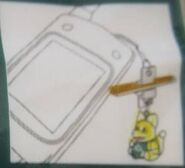 An illustration of Mini as a phonestrap 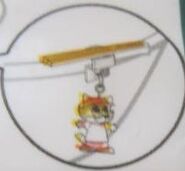 A set of two electronic foxes Nissin gave out as a prize in 2001. The fox on the left bears a resemblance to the other fox phone strap seen on the back of Mini's phone strap packet.
Add a photo to this gallery

the foxes's names in Japanese on the box 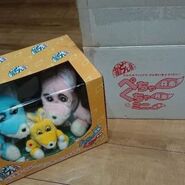 Pecha, Mini and Kucha in a box next to another box which they were delivered in

The back of the box which has Donbei's logo on it

Pecha without his tail and fur, Mini with with either one of his eyelids down or an eye missing, and Kucha with her fur loose and her tail off

Pecha, Mini, and Kucha out of their box with their instruction manual

another photo of the three foxes

Pages from the manual

Two other pages from the manual

A close view of Kucha and Pecha's faces

The bases of all three foxes

A notice for the winner and the manual

Retrieved from "https://official-furby.fandom.com/wiki/Donbei_Original_Kakeai_Manzai_Family_(Furby_Fakes)?oldid=28630"
Community content is available under CC-BY-SA unless otherwise noted.