Although they were a European exclusive, they were sold in the US via the Hasbro Toy Shop website. In 2006, some Furby Babies were sold with a Funky Furby in the same box, and on the front of the box, it would say "Exclusive Twin Pack". The voice provider for the 2005 Furby Babies remains unknown, though it is likely that Patricia Thompson, the voice actor for the adult 2005 Furbys, voiced them. They retailed for approximately $19.99.[1]

An "Exclusive Twin Pack" with a Funky Furby and Furby Baby

The back of the box

The Emoto-Tronic Furby Babies can move their legs into a sitting position when going to sleep and unfurl them when being fed after waking up. After feeding an Emoto-Tronic Furby Baby, you need to make it burp by touching its tummy. After being fed and stretching its legs out, you can press your Furby Baby's stomach to make it sing, or say a phrase. Your Furby Baby will laugh if you touch its tummy when it asks you to tickle it. 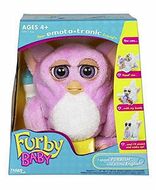 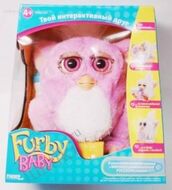 A Russian Pink Furby Baby in its box

A Italian Pink Furby Baby in its box 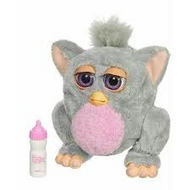 A gray Furby Baby with its bottle

A Furby Babies stockphoto with prototypes 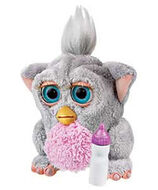 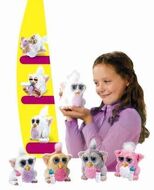 A photo showing a girl from the packaging with four prototypes 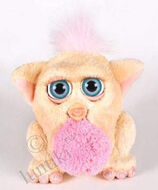 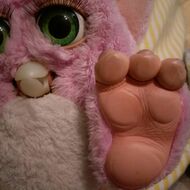 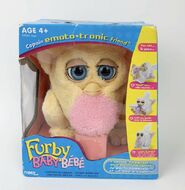 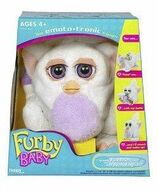 A Furby Baby With Lavender Belly And White Fur 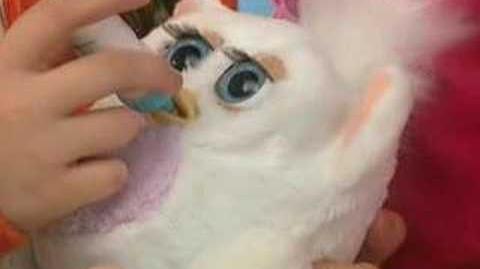