Fooby is the name of a Furdish-speaking 1998 Furby rip-off made by an anonymous company.

Fooby looks very similar to a Furby, however, Fooby has ears that look much fluffier than a Furby's ears. Fooby is only known to come with blue eyes and a tail. There aren't any Fooby's which are known to have manes, and Fooby's are only known to have white faceplates.

Only a snowball variant with a pink mohawk and a leopard variant with pink feet, lacking a separate stomach color are known to exist.

The top of Fooby's box

Fooby's manual in its box

3 Furdy's and a Fooby in its box

A Fooby in its box 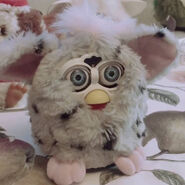 Retrieved from "https://official-furby.fandom.com/wiki/Fooby_(Furby_Fake)?oldid=25719"
Community content is available under CC-BY-SA unless otherwise noted.