When the popularity of Furby began dying out, manufacturers began cofnstructing Furbys with parts such as stomach fur, eyelids, eyelashes, and faceplates which would normally be used for specific color-schemed Furbys. These Furbys were given the label, "Fresh New Look!" on their boxes. However, even Furbys that didn't have modified appearances were sold with the "Fresh New Look!" label, too.

The Cxxx codes (with a varying letter at the end) are also generally used in serial numbers printed inside of 1998 Furbys' battery compartments and on their boxes (in the form of one or two green stickers) and seemingly correspond to the regular two-letter factory identifiers, with C015 being WT.

Some Fresh New Look Furbys are given unofficial names by fans such as the Sunrise Furby and the Magic 8 Ball Furby.

Furby Babies have also been sold with the 'Fresh New Look' label (see below).

A Greek Baby Pink Furby in its box 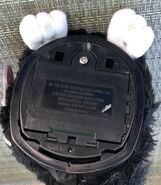 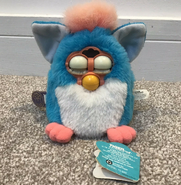 Click here to view or add more information about these Furbys.

Community content is available under CC-BY-SA unless otherwise noted.