This page is dedicated to Furby references in other media. These are unofficial and have nothing to do with Hasbro/Tiger Electronics

In the episode 'Barting Over', During Spring-cleaning, Marge told Homer to get rid of the Furbys as they had turned feral. The scene pans to Maggie in the garage, being surrounded by six Furbys, advancing in on her. These Furbys are based off the 1998 Furbys.

In the episode 'Grift of the Magi' A toy company produces 'Funzo', a huge success/fad to the shoppers of Springfield. In part of its success; it's revealed to be programmed to destroy other toys. It was revealed to be a Parody of the 1998 Furbys with the episode airing in December of 1999.

Meanies (Parody of Beanie Babies) made a gross-out Furby parody. On the behind of the Furby, the words 'No Fur-be' is present. 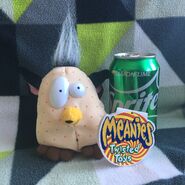 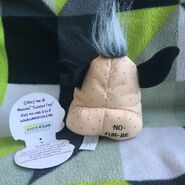 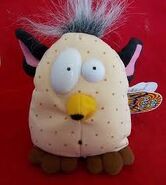 Mitchells vs. the Machines

In the movie, Mitchells vs. the Machines; the main characters run into a clan of (1998) Furbys; only to summon the Elder after the Furbys are attacked.

A parody made by Robot Chicken about how Furbys (1998 and 2012) were treated poorly. 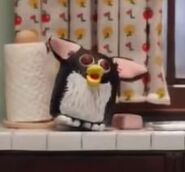 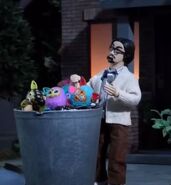 In season five, episode one of the 2012 series of Teenage Mutant Ninja Turtles, the motion sensors used resemble 1998 Furbys without fur.

In School Mode, the player is tasked to create Monokuma backups within fifty days. One of the backups the player can create, referred to as the "Monokuma Entertainment System", resembles a Furby.

Retrieved from "https://official-furby.fandom.com/wiki/Furby_(1998)/References_in_media?oldid=45133"
Community content is available under CC-BY-SA unless otherwise noted.