A mind of its own

Hasbro
Seven years after the release of the Emoto-Tronic Furbys in 2005, another adult Furby model was released. This Furby had multiple personalities, LCD eyes with various eye animations in them, an app to interact with, and a tail that could cause Furby to react when it was pulled.

The Furby Party Rockers were released after the 2012 Furbys and are considered the Babies of this generation.

The Furby Boom was released in 2013 and has the same model type.

This Furby model was released on September 16th, 2012 in USA. Reception had been very positive, with many critics stating it was the best Furby yet.

To get a more in depth view of the Furby's personalities, click here.

Generation 1 consists of the first 10 Furby colors which had first been released. October saw the release of the final 4 colors (Pink Puff, Green Man, Plum Fairy and Twilight) of Generation 1. In Japan, most of the Furbys of this generation are named after fruits and other foods.

These were originally launched in December 2012. The Punky Pink and Black Cherry Furbys were released in February 2013. This generation of Furbys consists of 10 types. This generation has tufts of hair on their heads. They also have a sticker inside the battery compartment showing where and how to use the reset button. These colors have also proven to be very popular, most notably the Cotton Candy variation.

Although there is no green Furby, photos of a green 2012 Furby have been seen on some pieces of merchandise such as stickers. The green furby is a recoloured sprite furby.[citation needed]

Like the 1998 Furbys, the 2012 Furbys have their own non-electronic accessories. These accessories were available in a handful of countries.

Furby glasses (officially known as Furby Frames) launched in September 2012. They are designed to only fit the 2012 furby. They are available in shades, hearts, stars and regular frames. They come in yellow, black, green, blue, orange, purple and pink. they also come with stickers to personalize them.

The Furby chair (officially known as the Furby Comfort Seat) is a chair in which Furbys can sit in. They launched in October 2012. They have ears and tails and the Furby Logo on them. They come in teal and hot pink.

Also known as the Furby bowling bag. The Furby carry bags are the answer to the 1998 Furby Carry Pack. They allow you to put Furby inside, and walk with it, while it can look right out of the transparent eye window. They also come with stuffed headphones for Furby to wear, And a pouch for holding a mobile device. They are available in 5 different variations, one variation being a different shape altogether. They were launched in November 2012.

The official Furby 2012 app allows you to feed and play with Furby with your tablet or phone. It requires Android or IOS. Currently it cannot be downloaded with current iOS versions. It can be downloaded for free from Google Play. You can give your Furby a wide range of food using the app and it also comes with a built-in Furbish to English translator.

Furbys were dubbed around the world to be sold in other countries. Here are the languages Furby can come in.

2012 and Boom Furbys use ultrasound to communicate with others and also their respective applications.

The protocol used for transmitting data is called ComAir and was developed by GeneralPlus, the manufacturer of the CPUs used in those models. 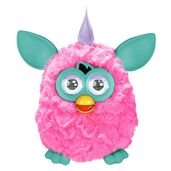 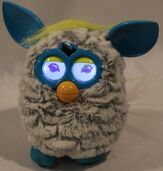 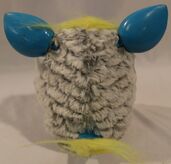 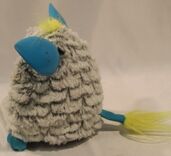 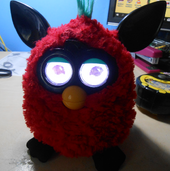 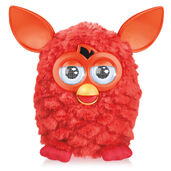 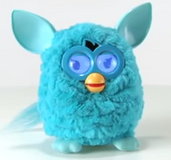 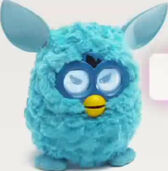 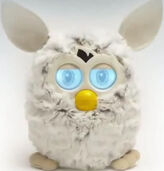