The Party Rocker can sing and chat with your Furby and its friends, has different voices and personalities for each Party Rocker and is compatible with most features of the app for Android and iOS. Furby Party Rockers launched Feb, 28th 2013 for USD $19.99.

It was confirmed as a New Years Day surprise from Hasbro on the official Facebook. They're something like Furbys, yet it's safe to say they're not anything like them. They have "holographic/lenticular" eyes that change and light up as you rock them (similar to that of Mattel's "lenticular eyed" versions of their die-cast Cars vehicles). There is a video and according to the video, they have a lower frequency. When you sing to them, their eyes flash in different ways, possibly because they are small and have no motion.

Although they are called "Furby Party Rockers", many fans believed they were the official babies of Generation 3.0. However, Hasbro trademarked Furby Boom! and Furby Furblings shortly afterwards, confirming that Furblings were in fact the true babies of the newest generation of Furbys: Furby Boom!.

Unlike the other Furbys that were released before and after the Furby Party Rockers they are quite small. Each Furby Party Rocker has a different color of fur, eyes, gender, faceplate shape, and shape of mouth. They all seem to have the same feet besides the different colors. Fussby, Scoffby and Wittby do not have ears but respectively hair, horns, and antennae instead. The Furby Party Rockers with ears (Loveby and Nerdby) have oddly shaped ones and the ears do not look like the ears that many Furbys have. Twittby is the only one in the group to have wings. 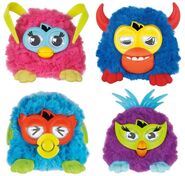 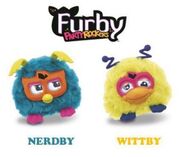 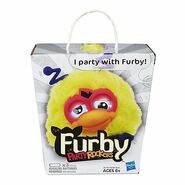 Party rockers at the 2013 toyfair. 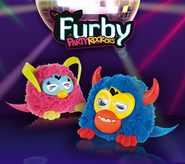