This page is for displaying images and information of official Furby websites, at its different stages.

Cliffhanger episodes were made by xBx Channel Media, and released on the Furby.com website.

Furby Cliffhanger Cartoons from old Furby.com website
Add a photo to this gallery

Add a photo to this gallery
The German site for Furby. This site gave various info about Furbys released at the time, like a Furbish to German dictionary, Furby news, Tips & Tricks, etc., and had various activities you could do by navigating through a town-like setting called "Furby Town", which also gave information about Furbys. A snippet of a german Furby song had also been included on the site, but unfortunately hadn't been archived. 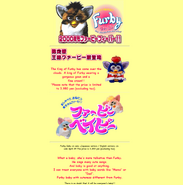 TOMY's Japanese site for Furby which gave info about Furbys released at the time in Japan, news about Furby related events and other promotions.

Add a photo to this gallery
A flash site which promoted the toys and movie through an interactive island, with various things to do like play games, watch videos (the only available video being a Spanish advertisement for the 2005 Furby), and an activity where you take care of a Furby, but very different from Feed my Furby, whereas you're taking care of a photo of a real Furby with multiple expressions as you brush it, take it's temperature etc.
Retrieved from "https://official-furby.fandom.com/wiki/Furby_Websites?oldid=39358"
Community content is available under CC-BY-SA unless otherwise noted.