Furbyland is located over a calm, blue ocean. It is dotted with mystical, sandy white islands, which the Furbys describe as "white fluffy floating in blue". Furbyland is home to Furbys, Shelbys, Furby Babies, and many other creatures. In Furbyland, Shelbys like to hang out near the water, while Furbys live farther inland. The Furbys left Furbyland in search of a creature they could bond with. The Story Of Furby describes the Furby tribe jumping from the edge of the "Furbyland cloud" to find Earth.

The Shelby Care and Training Guide states that the widely-believed idea of Furbyland being up in the clouds is a mistake that the humans made when Furbys described their sandy homeland islands as fluffy in the Furby poem, and that you can reach Furbyland from Earth by going a thousand feet underground, traveling through tall caverns, finding a green glow in the sky, and crossing an ocean. The text says that the Furbys left Furbyland because the previous creatures they could bond with, called Eons, had become extinct due to a climate change. Furbys cannot reach full maturity and potential without bonding, so they went on a search, finding humankind.

Furbys live in a family unit of about twenty, called a Furby clan. Clans band together to form tribes. If the human cannot care for a Furby, Furby makes the trip back to the tribe and becomes an Elder. An Elder is a Furby who talks to the Furby babies and educates them on the ways of the humans. (This suggests that a Furby is born in Furbyland, learns of Earth and goes to bond with a human, and returns when it is no longer bonded.)

The Big Fun in Furbyland game is set within Furbyland. There are four minigames: In The Clouds, Furby Fest, Club Furby, and Furby To The Rescue. In In The Clouds, Furby must eat a wide range of food items in order to keep flying and reach the end cloud. In Furby Fest, you must pair Furbys up for a rollercoaster ride. In Club Furby, you choose the colors to the beat. In Furby To The Rescue, you must help Furby escape the maze from a giant spider with a lost Furby Baby. The opening sequence from this game shows parts of the Furbyland world, including floating grassy and desert islands within the clouds, and a sandy beach or desert below.

The original Furby.com website was set in Furbyland. It shows buildings on the clouds. There was also a theatre featuring cliffhanger animations by xBx Channel Media, where users could suggest what happened next. These videos were set in a range of places, including the moon, the ocean, and a jungle. In the moon animation, a Furby Baby is launched from a space station on a cloud on Earth, and flies into space, passing the Furbyland cloud, and lands on the moon. In the ocean animation, there are several islands shown over the ocean, which is what the Shelby guide describes to be Furbyland. In the jungle animation, it seems that one of the Furbys is living in the jungle.

In the Fun time Furby Handheld Game, you must control a Furby on the play screen and collect hearts to raise your high score. It is set within Furbyland, in the clouds. There are several obstacles and creatures to avoid hitting as you move around. Here are some other creatures from this game that live in Furbyland:

Squints
Squints want to take over Furbyland. They appear to be intelligent and technologically advanced. They drive in snowmobiles and cloud cars, and own snowball launchers. Some cloud cars have the ability to summon lightning bolts and tornadoes.

Flutter Byes and Inchyworms
Inchyworms are the larvae of Flutter Byes. Flutter Byes are butterfly-like, and will swarm the Furby. If an inchyworm is not killed, it will split into two inchyworms, immediately going into the pupa stage by making cocoons. The two cocoons then hatch into Flutter Byes.

Gondras
Turtle-like creatures that will charge at Furby. They can also get nervous and will start laying eggs. Their eggs explode when thrown.

Tornadoes
Tornadoes are summoned by Squints in special snow cars. They have eyeballs.

A Gondra throwing one of its explosive eggs.

In the Furby Adventure Game - Help Furby Get Home!, you must compete with other players to move your Furby figurine across the clouds to the center of the board, labeled Furbyland. You can get to the end quicker by riding down rainbows and by reading the Furbish cards. The instructions call it the board the "Furbyland gameboard", and call the center the "Furbyland cloud". 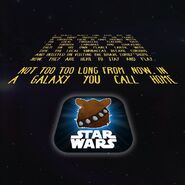 Backstory of the Furbacca
Add a photo to this gallery
Retrieved from "https://official-furby.fandom.com/wiki/Furbyland?oldid=44186"
Community content is available under CC-BY-SA unless otherwise noted.