Gigabot is a 1998 Furby fake which takes on the design and appearance of a robot. It was sold during 1999 by B/O Electronics in the UK. The golden version of Gigabot, however, is only known to have been sold in Japan.

The Gigabot is a Furby fake that has feet-like cups, two arms which move, and two antennas just like Robonagi and his remake, Bulinagi. Gigabot has a speaker on his tummy, with two useless bumps and a button. His beak looks like steel lips, and he has no eyebrows or eyelashes.

They have 3 holes above their eyes. One is an infrared receiver, the second one is an infrared sender, and the third one is another light. Gigabot's can come in silver or gold. Behind the Gigabot is an attached backpack; this is a feature it shares with Robonagi, but unlike a Robonagi's backpack, you cannot insert anything into a Gigabot's backpack. They also have a tilt mechanism, similar to original Furby's.

Robonagi makes sounds similar to that of a Gigabot's. Some people even say that its voice sounds like the voice of a circuit-bent Furbish. It's a deep voice that almost sounds like he's croaking like a frog.

Gigabot also makes the same sounds as Furbish, including the same whistles and noises when fed. 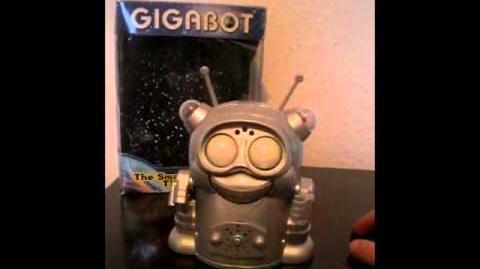 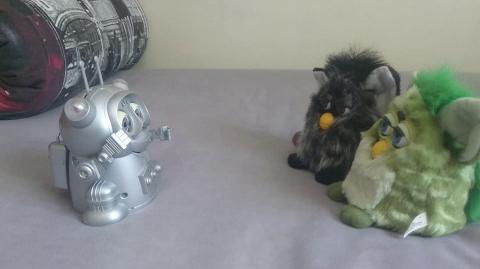 Can GigaBot interact with original furby 1998?
Add a photo to this gallery
Retrieved from "https://official-furby.fandom.com/wiki/Gigabot_(Furby_Fake)?oldid=24033"
Community content is available under CC-BY-SA unless otherwise noted.