250,000
Hasbro, Tiger Electronics, and Warner Bros partnered up to introduce the Interactive Gizmo. Gizmo is based off a character named Gizmo from Gremlins, who is a Mogwai gremlin.

"Friend of Furby. Features the actual voice of Gizmo! Fully animated with 160 word vocabulary. I can talk to Furby and Furby Babies. I can play games and learn tricks."

Gizmo looks very different from a regular Furby. Unlike Furby, it has appendages, a mouth instead of a beak, a brown nose above its mouth, and eyes which are different from a Furby's eyes. It also lacks a tail or mane. Gizmo has a white patch of fur around its left eye, a white stripe on its head, and white fur on its wrists. Its body fur is brown and so are its outer ears and arms. Its inner ears, feet, eyelids, and hands are pink. Its face plate, legs, and tummy are white. It has four fingers on each hand, and four toes on each foot.

Gizmo making its appearance at a toy fair 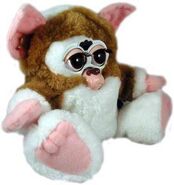 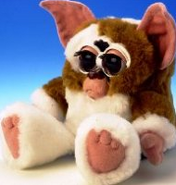 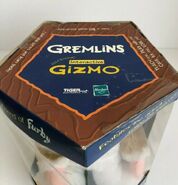 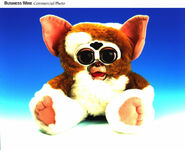 A possible prototype (source)
Add a photo to this gallery

Retrieved from "https://official-furby.fandom.com/wiki/Interactive_Gizmo?oldid=43894"
Community content is available under CC-BY-SA unless otherwise noted.