The Kid Cuisine Furby is a 1998 Furby that is a special edition. It is named after its ability to only be obtained through a coupon-collecting competition hosted by Kid Cuisine and Publix. Only 500 were released, making this the rarest non-prototype Furby.

A Furby Buddy of the same color scheme was also released.

The Kid Cuisine Furby has bright blue body fur. It has yellow stomach fur, and a mane made of red and yellow stripes. The faceplate is white. It has red feet, green ear insides, blue ear backs, and white eyelashes.

A Kid Cuisine Furby in its box 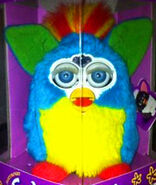 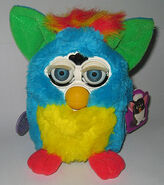 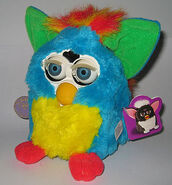 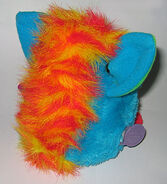 Retrieved from "https://official-furby.fandom.com/wiki/Kid_Cuisine_Furby?oldid=37462"
Community content is available under CC-BY-SA unless otherwise noted.