McFurbys are the name given to Furby toys released in McDonald's Happy Meals.

From March 26 to April 22, 1999, McFurby plastic toys were distributed. They were based on 1998 Furbys. There were 8 series with each series containing 10 Furbys. Each series introduced a new action. A total of 8 different actions and 80 to collect were released.

The complete set of the 1999 McDonalds Furby toys 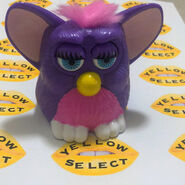 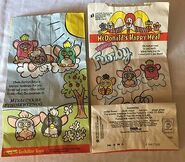 From March 23 to April 13, 2000, McFurby stuffed keychains were distributed. They were based on 1998 Furbys. There were twelve to collect. The names of the different variations are Tiger, Tree Frog, Elephant, Monkey, Raccoon, Lamb, Giraffe, Fox, Dinosaur, Owl, Cow, and Diamond Back Snake.[1]

During 2000, McFurby plush dolls were distributed in the UK. They were based on 1998 Furbys. They were quite large for a McDonalds Happy Meal Toy. The second series in the UK were Furby andShelby dolls that would sing with each other via a sensor in their feet.

8 total. The keychains were sold at McDonalds in 2001 in Japan and Thailand. The purple keychain's stomach will display a red light-up heart when it is squeezed.

A Japanese advert showing all the keychains

A case of McFurby keychains with a red handle

A Thai advert showing all the keychains

A case of McFurby keychains with a yellow handle

During 2005, Burger King Furbys were distributed. They were based on Emoto-Tronic Furbys. There were 100 to collect in Burger King. Each one came in a mini pet carrier. These toys have eyes that can move when they are lying down or tilted back, and they can wiggle their ears when a button on their back is pressed.

During 2006, McFurby plush toys were distributed in Latin America. There were 8 to collect. Each one plays a different tune when its stomach is pressed. The name of the McDonalds promotion was "Meu Querido Furby" which means "My Dear Furby". These plushes could have two face variants: Either they have their eyes looking down and their beak closed, or they can look straight forward with their beak opened. Each plush could have different eye colors. 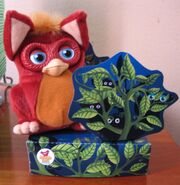 Sold only in 4 variations. 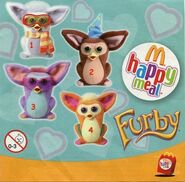 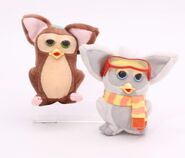 These were non-musical plushes that each had a different accessory such as a backpack, shades, or a scarf. The purple and green Furby wearing shades appears to be based off a Funky Furby, but it has no tail. They are known to have been sold in a few different places in Europe.

In December of 2013, McFurby Booms were distributed. They were based on the Furby Boom line, and each had lenticular eyes. They had differing qualities such as the Peacock's Party Rocker-like qualities or the Wave's googly eyes. In January 2014, McDonald's from Latin America released Furby 2012 toys. There were 6 to collect. 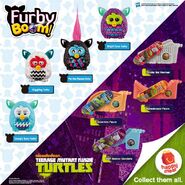 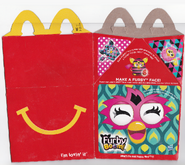 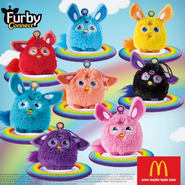 QR egg codes from all 8 toys. 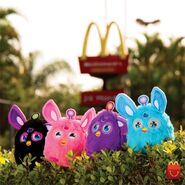 a promotional photo of the McFurbys from a McDonald's Facebook page 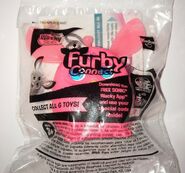 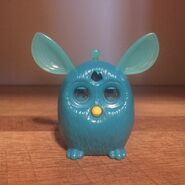 A Sonic Wacky Pack Furby Connect outside of its bag.

The 2019 "McFurby" is a reissue of the original 1998 McDonald's Furby toy released in 1999. It only came in one color and was for a limited time at select McDonald's locations.

To celebrate the 40th anniversary of Happy Meals, McDonald's distributed remakes of older versions of individual happy meal toys, which were available from November 7th to November 11th. The Happy Meal release included one of the variations of the McDonald's 1999 Furby toys. This version appears to resemble a series 2 number 7 McDonald's Furby, though has slight differences in the design, most likely so the two versions aren't confused for each other. On it's packaging, it states it's from 1998, even though the first McDonald's Furbys weren't released until 1999. Other toys in this release included:

(The toys above are listed in order of toy number, and not in the order of year released)