Noxy (Нокси in Russian) is a Russian 2012 Furby rip-off manufactured by Play Smart, and has an appearance which looks exactly like a Phoebe's.

Noxy has its own voice like Pixy does, and will say some phrases which originated from the 2012 Furby's. They can repeat your voice when you pull their tail. They come in only four colors: blue, white, black, and red. Noxy's are only available with LED eyes that flash red and blue. 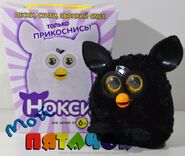 Retrieved from "https://official-furby.fandom.com/wiki/Noxy_(Furby_Fake)?oldid=25715"
Community content is available under CC-BY-SA unless otherwise noted.