Released in 2000, it was intended as a Viral Market idea, FURBY FOR PRESIDENT. For the first time, the Furby actually has unique, extra dialogue. This Furby sings Hail to The Chief. A video of that is available here.

The President Furby has deep, light brown body fur. Its stomach fur is the same color as the rest of it. It has an orange-brown mane. The faceplate is white. It has black feet, white ear insides, brown ear backs, and black eyelashes.

This Furby wears a black suit with buttons. Two badges are attached, one of the U.S.A. flag, and one reading "Furby for president".

This poem is found on President Furby's tag. 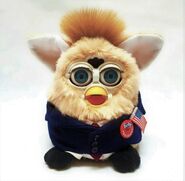 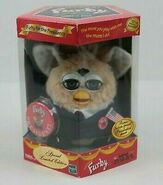 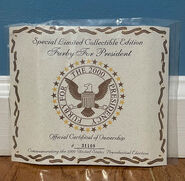