Unknown
Purby (not to be confused with another fake that has the same name) is a knockoff Furby based on the original Furby toy and the appearance of a Mogwai from the movie Gremlins.

All Purbys have a pair of furry arms, and hands with four fingers. They also have two ears, two feet they can walk with that have four toes, a pair of eyes with white eyelids that move, and brown eyes with black plastic eyelashes. They also have plastic mouths with nostrils, and their feet have fur beneath. Purbys don't have tails or manes, and only the lower part of their mouths can move when singing, not the upper part.

There are three variations Purby comes in.

This version of Purby has a small mouth, brown and white fur with a large patch of white for its tummy, and orange ears. This version can be seen at the back of the box. It has a patch of fur around its left eye, and white fur on the lower part of its arms. 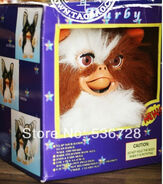 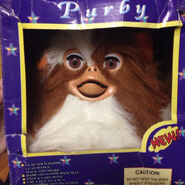 This version of Purby has black and white fur. It has white inner ears while the outside of its ears are black, white fur for its stomach, and white fur that covers its arms completely. It also has a wide mouth with the bottom part of the inside of its mouth painted pink.

This version of Purby is like a mix of the two variations listed above. It has a wide mouth with the bottom part of the inside of its mouth painted pink, white fur that covers the lower part of its arms, a white patch of fur around its left eye, white stomach fur, and orange ears.

Purby is only known to sing Old MacDonald while walking around with its mouth and ears moving and hands moving up and down, while blinking.

An image showing the word "New!" on a ViviGo Gorilla's box (owned by MrJohnjohn25 on YouTube) and Purby's box 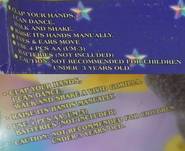 Furdy, Purby and Dubby.
Add a photo to this gallery

Retrieved from "https://official-furby.fandom.com/wiki/Purby_(Mogwai-like_Furby_Fake)?oldid=45155"
Community content is available under CC-BY-SA unless otherwise noted.