The more you play with me, the more I do!

1998 Furby
1999 Furby Babies
Gizmo
Interactive E.T.
Furbish (furby fake)
The Interactive Shelby is a line of Furby Friends released in 2001. At the time, Furby sales were dwindling due to the sheer amount of supplies and colors available. Tiger decided to release one more Furby friend to squeeze as much life as they could out of the franchise. Though Shelby was very popular when it was first released, most people passed it off as "just another Furby". After only one year of manufacturing and two generations of Shelbys, production was halted for Shelby and Furby. In early 2002, The Furby franchise was officially dropped from the market, leaving many store owners marking down Furby products to as little as 5 dollars. Shelby speaks Shelbish (their native language), Furbish and English. Shelby can also talk to Furby, Furby Babies, Gizmo, Interactive E.T

Shelby somewhat resembles a Furby inside a clamshell, which it can open and close. Unlike some Furbys, Shelbys have no tail, instead, having a fuzzy mane running down their back and flicking out the sides of their shell. It also has plastic antennae, or "tennies" on top of its shell, which are used for communication with other Furbys and Shelbys. They enjoy wiggling their "tennies" around. Shelbys can look left and right with their eyes.

The Shelby has a somewhat cocky personality with a more vulgar attitude and up front comments, unlike Furby and Furby Babies. If Shelby is held upside down for about 1 minute, it can become angry and insulting which would make it be in a bad mood, often retreating back inside its shell. If it is disturbed, it will open its shell up again and say, "How rude!". If Shelby is fed during its bad mood, it will either say the food is yucky, or it has "horrible indigestion" (followed by a long burp).

Many of Shelby's phrases, such as "Shiver me timbers!", "Arrgh!" and "Walk The Plank!" are pirate-like.

Shelby Care and Training Guide
Add a photo to this gallery 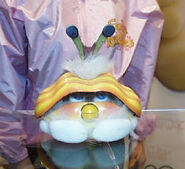 a prototype Shelby at a Japanese toyfair 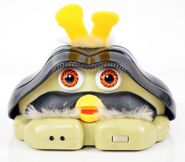 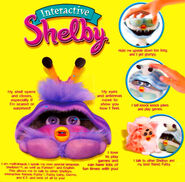 Back side of box 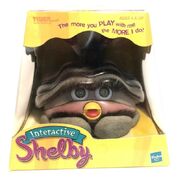 Shelby Generation
Add a photo to this gallery
Retrieved from "https://official-furby.fandom.com/wiki/Shelby?oldid=41229"
Community content is available under CC-BY-SA unless otherwise noted.