5
Bejewelled Furby is a is a 1998 Furby that is a special edition.

It was sold at the FAO Schwarz Toy Store in October of 1999, and has been given the title as the most expensive Furby to ever be sold, with a price tag of US$100,000, as it was adorned in all sorts of fine jewels. It hadn't been given its name until later on. For a short time after release it was only known as "Jeweled Art" Furby.

It is not officially known if this was intended as a proper release of a Furby, as it was not sold by Hasbro or Tiger Electronics, however, a portion of the money went to World Class Hasbro Children's Hospital on Rhode Island.

The Bejewelled Furby was a Snowball Furby studded with various gems, and featured an array of jewelry, including a tiara, a necklace, and a pair of earrings, all 3 pieces being removable and wearable.

The Bejewelled Furby was sold at FAO Schwarz, a company that originated in the United States in 1862 before moving to New York City in 1870, where the headquarters are now housed. FAO Schwarz was owned by Vendex KBB at the time of this Furby's release in 2001, where it has since had multiple bankruptcy problems with multiple companies in ownership of it.

A trademark FAO Schwarz was infamous for was their exclusive and expensive toys, especially the jeweled ones, The Bejeweled Furby being an example. However, unlike the jeweled etch-a-sketch or 14-karat gold-plated slinky, The Bejeweled Furby ended up being a bit more obscure. The main reasoning for the Furbys' obscurity was the dwindling low sales of all Furbys at the time. With the price at US$100,000 (approximately $150,411.23 as of 2018), only 5 were made, and only 2 were known to have been sold. A portion of the proceeds would go to the World Class Hasbro Children's Hospital, the Pediatric division of Rhode Island hospital.

It is speculated that one of the two sold Bejewelled Furbys is housed in a museum. The other is privately owned.

Sidney Mobell was the main designer for the Bejewelled Furby. Sidney is known for his various works of jeweled and exclusive pieces, such as the gold monopoly game, a gold plated sardine can with studded sardines, and various other excellent pieces. 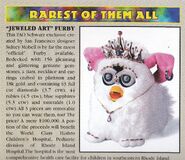 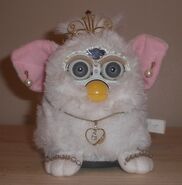