I was researching a Furby event when i happened to find this image.  The only information i could find abt this image was this:

Another thing i noticed was how the walkaround(?) in the back has a white tummy & hair, while the one Kimiura's holding has a same color tummy and black hair.

There's so many possibilities i can think of as to what this may have been. Maybe it was a prototype used to test the language? Maybe it was a planned Japanese exclusive Furby that never came to be? Maybe the one in the back had a design for an also potential Furby?

If anyone has more info about this please let me know! I'll update this if i find out any more about the event. 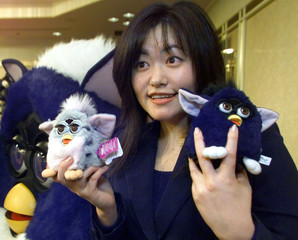 Retrieved from "https://official-furby.fandom.com/wiki/User_blog:Mcdiis/Navy_blue_Furby%3F?oldid=23396"
Community content is available under CC-BY-SA unless otherwise noted.