I thought I'd quickly post this for people to know about these fakes, and because I plan on working on a page for them when I can.

There are fake Furby buddies that look VERY close to the actual thing. I think the manufacturer name for them is called 'Sandy' according to a Rakuten listing (but I don't know if another company was also distributing them like how Robonagi is known to have had more than one distributor or if the listing is wrong).

Want to know something surprising about this company? It made fake Furby buddies that look so much like custom Furbys!! I found the yellow bird version from a Thai user on Instagram and the green one is for sale on Rakuten (France) still! I thought it would have been sold by now since I saw it in 2015, but it's still for sale.

The main differences between a normal Furby buddy and the knockoff ones that look very close to the real ones include:

Here's a link to the weird green one for sale from France that looks like a custom: https://fr.shopping.rakuten.com/offer/buy/279756303/adorable-peluche-furby-vert-fluo-13-cm-rare.html

Here's a link to the yellow one that was being sold on Instagram from Thailand (it's possible they imported it from somewhere else since they have an Australian Furby restaurant toy): https://www.instagram.com/p/BteMzBoHPom/ 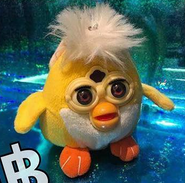 Fake Buddies that Look Identical To The Real Ones

Add a photo to this gallery
Retrieved from "https://official-furby.fandom.com/wiki/User_blog:Vocaloli_1998/Clever_Furby_Buddy_Fakes?oldid=26602"
Community content is available under CC-BY-SA unless otherwise noted.