Thanks to Anush Yaranushian, who showed me a French website full of Furbys and merch, I’ve been finding things that I either have not seen before or even things I have seen before, but not with their original packaging.

Furby Shoes and Shoe Box.  I’ve seen these before on Wallapop, but never saw the box they came in.

I just want to archive these pictures here for more people to see. I might use the images of merch at some point, but I honestly dunno how we're gonna use images of merchandise on this wiki has since there's a lot of Furby merch.

a close view of the tag

another hoody pet with strange eyes

A Furby shirt (I'm not sure if this is official???)

another photo of it 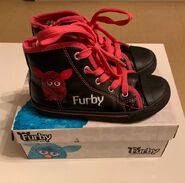 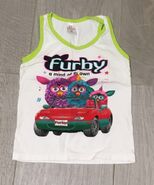 Add a photo to this gallery
Retrieved from "https://official-furby.fandom.com/wiki/User_blog:Vocaloli_1998/Strange_French_Furby_items?oldid=24217"
Community content is available under CC-BY-SA unless otherwise noted.